The area of the Cabo de Gata was declared a Natural Park in 1987. It has tremendous environmental value in terms of its wild life, botany, geology and its stunning scenery and is one of the representative arid ecosystems in Europe.

The classification of Natural Park means that the presence of humans is harmonious and is one of the key objectives of the protection in the Park.

The beaches and coves are mostly only accessed by boat or on foot and there are no bars or facilities to spoil their beauty. The sea water is clean and crystal clear and no waste water or industrial waste is discharged from anywhere in the Park.

The area is home to a host of birds and animals as well as pink flamingos that live in the salt water flats.

Join Walk Andalucia on a lovely 8 day guided walking holiday in the Cabo De Gata where our team of guides will help you explore this beautiful region of Andalucia.

Guests will stay in a lovely hotel with views overlooking the bay of the small fishing town of San José. There is access to the sandy beach from the hotel.

On our varied and interesting itinerary we walk trails and coastal paths passing through tiny fishing villages,rocky headlands, over two of the most beautiful beaches in Andalucia, a walk into a gold mining area with far reaching views over the Tabernas desert,a visit to an old cortijo that was featured in many Spaghetti western movies and the setting for Federico Garcia Lorcas drama, The Blood Wedding and much more.

Included in the holiday:

. Transfer from to and from Málaga airport to San José. ( Enquire for airport transfer times before booking flight.)

. 7 breakfasts, 5 lunches , 6 dinners- set menus taken in the Hotel restaurant . No drinks are included with dinners.Snacks,fruit,juices, baguette and salad included on walk days.( No lunch or dinner inc on rest day). 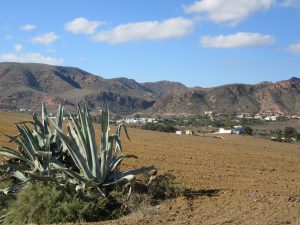 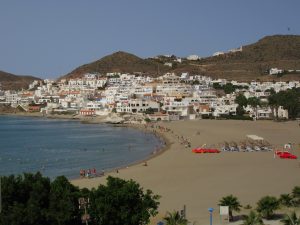 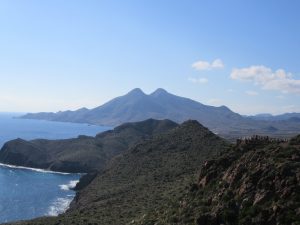 An easy but interesting introduction to the natural park taking in an old railway line ,centuries old sea defenses and the oldest olive tree in Spain

We begin in the tiny fishing village of Agua Amarga and follow a beautiful coastal trail passing above three secluded, sandy coves. Steady ascent to our highest point and a fairly steep descent into our last cove of San Pedro. Ascend from the cove continuing to be high above the Mediterranean where we reach the coastal town of Las Negras.

Our walk begins at a viewing area which looks out over the Mediterranean and the rugged coastline of the Cabo De Gata National Park. We follow a low coastal trail passing many of the tiny hamlets dotted around this area. The walk takes us around the headland on a wide track and we descend gently into San Jóse.

Rodalquilar was once home to a gold mine and our walk takes us into the mining area via an excellent trail with far reaching views inland and over towards the Tabernas desert. We visit the Cortijo del Fraile which featured in The Good, The Bad and The Ugly western as well as being the setting for the Federico García Lorca drama, The Blood Wedding.

The very best walk! We begin at the light house and gently descend along a wide coastal path. This path affords us magnificent views of the coastline and San Jóse in the distance. We then climb steadily towards two spectacular beaches which have caught the eye of many a film director.